As they say in the marketing biz, image is everything.

That’s why Dell Inc. unveiled a sneak-peek profile of its next stylish Adamo computer, the Adamo XPS, on Wednesday, 9/9/09.

The new Adamo is not yet a real product, but when that happens, it’s going to be very thin: 9.99 millimeters, which is a little less than four-tenths of an inch.

The image Dell provided wasn’t a product launch. It was more of a peek at the design to come.

“At this point, it’s in the design concept phase and not ready to be launched as a product. I’ll be sure to keep you updated as that status changes,” said Lee Mokri, with Dell’s public relations firm, Enfatico.”

Here are all my Enfartico posts: 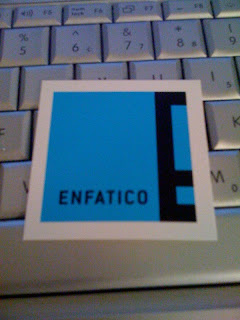 “Ever wonder what it would be like to be an agency and work for a single client? Come learn about Enfatico’s approach to design and its relationship with Dell.

We’ve been told Todd Ruff is hosting….not sure about this though.

Pay at the door. Cash or check only. Limit 30.
Please RSVP by email. jidol.design@gmail.com”