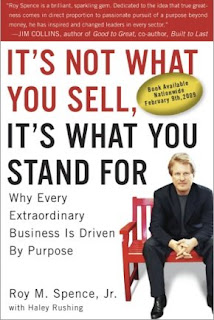 “GSD&M Idea City CEO Roy Spence will debut and talk about his new book IT’S NOT WHAT YOU SELL, IT’S WHAT YOU STAND FOR: Why Every Extraordinary Business is Driven by Purpose (which doesn’t hit bookstores nationwide until February 9th: BookPeople will be on hand, selling copies)

As CEO Roy Spence, leads GSD&M Idea City, a national marketing communications and advertising company that has helped grow some of the world’s most successful brands.

Roy Spence has been Ad Man of the Year, Idea Man of the Century, University of Texas Distinguished Alumnus and a whole string of other “bests.” In September 2006, The Amazing Faith of Texas, a book by Roy Spence and the People of Texas was published, and in 2007 he was named to the board of directors of the Lyndon Baines Johnson Foundation. A popular keynote speaker, he regularly addresses audiences from throughout the business, government and nonprofit communities.