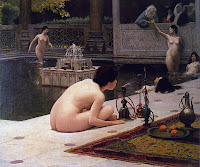 So, I went to T3’s April Fools’ Day party last night. I had heard about their April 1st parties, put together to celebrate CEO Gay Gaddis’ birthday, for quite some time and was lucky enough to get an invite. This year’s theme was Arabian Nights and this manifested itself with hookahs, belly dancers, and Baba Ghanoush….oh, I almost forgot the very Arabic Shiner Bock…come on…Shiner is at least sorta east of Austin.

The highlight of the evening was getting a chance to chat with T3’s, SVP of Creative Services & Account Planning, Jay Suhr. You might recall that Jay is a major award winner. Jay now also holds the honor of being the first person to call me an “agency spy” to my face. I think he was joking around…or at least I hope he was as he also mentioned something about having me “sacrificially thrown out” of the party. Well, I wasn’t thrown out and I was also able to say hello to several other T3ers I have befriended over the years.

Thanks to Gay and Lee Gaddis for putting on such a nice party and for keeping the T3 ship afloat all these years. I could tell from the partying clients and team members that they really have built a happy family.