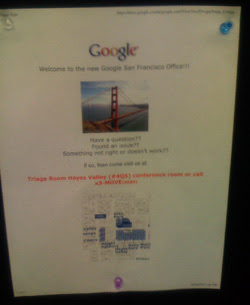 So, We did swing a meeting with Google. You might think this meant a drive out to Mountain View, but no, we got to meet with them in their three day old offices near the Embarcadero and the Ferry Building. Lots of blue, red, yellow, and green balloons hanging from the ceilings. Printers named after San Francisco landmarks and conference rooms named after neighborhoods. The offices on the bay side had very nice views of the bridge. The sign (at right) read “Welcome to the new Google San Francisco office!!!” and then also had a little map of the floor as well as info on what to do if you are having any tech issues.

After a nice presentation from the Google team, we were treated to dinner at a near-by restaurant. You hear about how smart Googlers are. After meeting with these “kids” all in their early to mid twenties, I must say that they were some of the most articulate and intelligent people I’ve met with in quite some time. Thanks Google.